The Settler Occupation of Hebron Continues

The old wholesale market in Hebron may soon be torn down and a new settlement built in its place with 70 apartments. The new settlement will double the number of settlers in Hebron and be a new link in a chain of already established settlements and settler occupied buildings aimed at creating an Israeli settler only area through the middle of the old city.

The current Israeli Minister of Defense, Naftali Bennett, has given the Municipality of Hebron 30 days to agree, after which legal proceedings will be brought to allow for demolition of the market and construction of the settlement. The Palestinian Municipality of Hebron is the current protected tenant of the building and is contesting the order in court  along with the Israeli peace group, Peace Now.  so The appeals will probably not stop construction because Israeli courts nearly always side with settlers.

Hebron was divided by the Hebron protocol of 1997 into two sections - H1 under nominal Palestinian control and H2 under full Israeli military control. H1 has about 200,000  Palestinian residents.  H2 has about 30,000 Palestinian residents and a few hundred Israeli settlers. The settlers live in five established settlements and several settler-occupied buildings. The settlers are supported and protected by about 2000 Israeli soldiers and border police. Hebron is the only city in the West Bank with settlements inside the city.

The Hebron protocol came about as a result of the Hebron massacre of 1994 in which an American-Israeli settler, Baruch Goldstein, killed 29 Palestinians and wounded 125 as they were praying at the Ibrahimi mosque. The massacre led Israel to establish a policy of “separation” between Palestinian residents of the old city and Israeli settlers.

Israel enforces the separation policy with barbed wire and walls around the settlements, with 22 checkpoints, with closure of major streets to Palestinian pedestrian and vehicular traffic and with 64 barriers that keep Palestinians from many streets and away from the settlements. These restrictions on movement, the continuing harassment of Palestinians by settlers and soldiers, and the military’s closing of shops has kept people out of the old city and created a ghost town out of what was once the economic heart of an entire region. All this for the sake of a few hundred settlers and Israel’s expansionist ideology. It is more than ironic that it is Palestinians who have been punished because of a settler’s horrible crime. 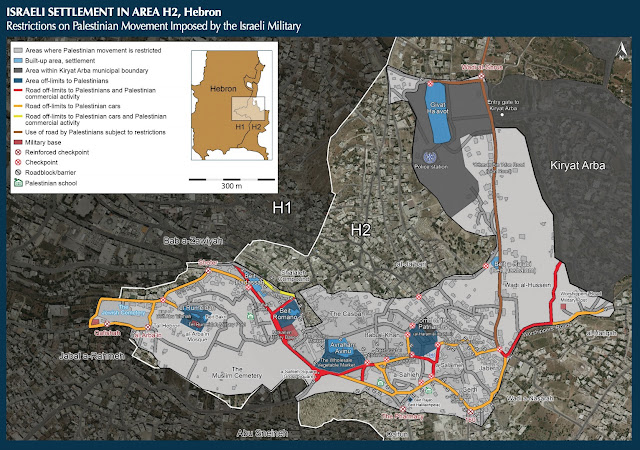 
The pale grey area is the area of maximum Palestinian movement restriction.  The colored roads are either off limits to Palestinians or subject to restrictions.
(Map from B’Tselem Report , Playing  the Security Card: Israeli Policy in Hebron as a Means to Effect Forcible Transfer of Local Palestinians)

The old wholesale market where Israel will build the proposed settlement fronts on Shuhada street. Shuhada street used to be the main commercial street of Hebron but was shut down after the 1994 massacre and has not been reopened. Israel closed the street to Palestinians and welded shut the doors to Palestinian shops and homes that face the street.  The wholesale market shut down along with the street.  The street now connects the different Israeli settlements and settlers are free to use it.

The new settlement will greatly increase the settler population of Hebron and will further consolidate the creation of a Jewish settler only zone extending from the large settlement of Kiryat Arba just outside the city limits in the East through to the Jewish cemetery at the Western tip of H2.

Amira Hass in Haaretz argues that the Jewish Community of Hebron has long term plans for Judaizing a much larger portion of Hebron than a small zone within the old city. She points out that they have not only renamed streets in the old city with Hebrew names, such as renaming Shuhada Street King David Street, but have also given Hebrew names to streets in the large H1 section of Hebron.

The most important thing to say about the new settlement and all settlements in the West Bank is that they are illegal under international law. The Fourth Geneva convention, to which Israel is a signatory, declares that an occupying power may not transfer its citizens into the territory it is occupying. The second most important thing to say is that the international community has done nothing to hold Israel accountable for five decades of systematic violation of the law. It is likely that US Secretary of State Pompeo’s recent statement that settlements are not necessarily illegal under international law has further emboldened Israeli settlement building and in particular the building of the new settlement in Hebron. The question that settlements raise is whether the world will live by laws, rules and respect for human rights or will continue to live by might makes right.

Jews and Arabs lived relatively peacefully together in Hebron during the 19th century and earlier but tension and sporadic violence over Zionism and the new arrival of Jews from Europe led in 1929 to a terrible massacre in which 67 Jews were killed and many more wounded by an Arab mob. Many Jews were sheltered from the mob violence by Arab families, but the massacre nevertheless marked a turning point in the history of the Jewish community of Hebron. Many Jews left at that time and those who remained left in 1948 when the state of Israel was created.

The land on which the old wholesale market was built was owned by Jewish people before 1948. Such prior ownership of land by Jewish people is used to justify taking ownership of land in the occupied territories by settlers and in particular by the Jewish Community of Hebron for the new settlement in Hebron. The argument has a serious problem, however. If ownership by Jews prior to 1948 of land that is now in the occupied territories gives them rights to current ownership, then surely Palestinian ownership of property prior to 1948 in what is now Israel proper gives those Palestinians the rights to the land, houses and bank accounts taken from them in 1948. 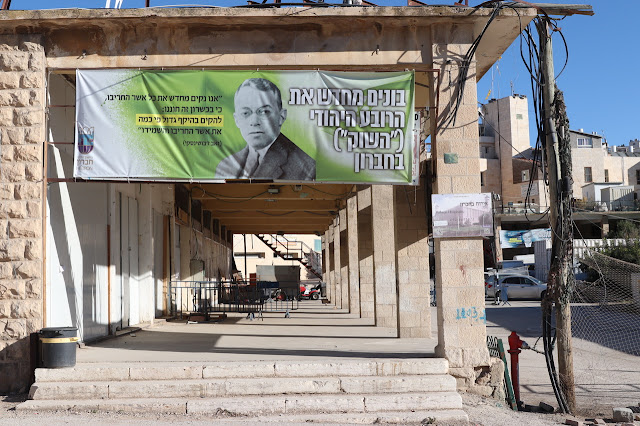 The old wholesale market in Hebron with a banner showing the image of Ze’ev Jabotinsky.

The settlers have hung up a banner on the front of the wholesale market with a picture of Ze’ev Jabotinsky. Jabotinsky was the founder of Revisionist Zionism which broke with the more cautious labor Zionism of Ben Gurion in calling for Israel to take all of the land of historic Palestine, from the Jordan River to the Mediterranean, and even beyond. Jabotinsky also insisted that Palestinians would never give up their land except through the use of military force and the creation of an “Iron Wall” between Jews and Palestinians. Benjamin Netanyahu’s father, Benzion Netanyahu, was Jabotinsky’s personal secretary and Jabotinsky is considered the intellectual father of Benjamin Netanyahu’s party, the Likud party.

Thus, the banner on the wholesale market with an image of Ze’ev Jabotinsky reveals the commitment of Hebron settlers to expansionist exclusivist goals and to the use of military force in achieving those goals. This is also shown by the recent history of settlement creation in Hebron and the current militarized occupation of the old city.  The settlers did not come to Hebron with the goal of living side by side and in harmony with their Palestinian neighbors.